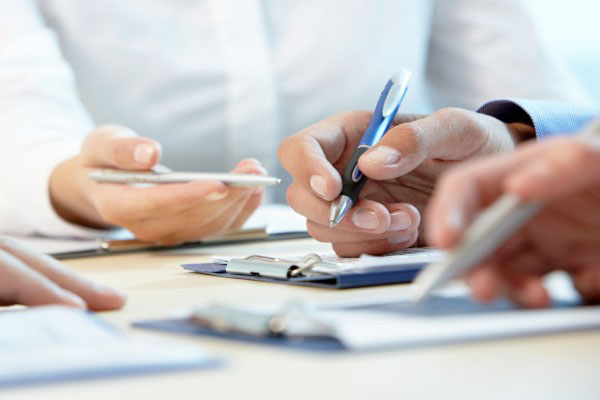 A. owing to B. because of C. on account of D. for the sake of

A. instead of B. in addition C. as well D. so much

A. takes away B. takes in C. takes over D. takes up

C. so much a coward D. so much of a coward

A. should speak B. spoke C. should have spoken D. speak

A. was almost hurt B. was to hurt himself

C. was hurt himself D. was hurting himself

A. When compared B. Compare C. While comparing D. Comparing

34. The fact ______ money orders can usually be easily cashed has made them a popular form of payment.

A. decides on B. sticks to C. goes over D. makes up

Investors can _51_ money simply by loaning it. The money they loan is called capital. Security (担保) is an expensive item which the borrower mortgages (抵押) to the investor to show that he intends to _52_ the debt. The way investors make money on loans is to charge interest. Interest is money that _53_ pay to investors for the use of their money. Interest is usually a certain percentage of the capital. Investors sometimes _54 ten percent or more interest per year. The interest may be calculated daily， monthly， or yearly. The interest must be _55_ before the capital can be repaid. If the interest is not _56_ the agreed rate， the interest is added _57_ the capital. Then the borrower has _58_ pay interest on the unpaid interest _59_ on the capital. A debt can grow quickly this way. If the total of the capital and accumulated interest gets too high， the investor will take _60_ of the item used as security and sell it to get his money back.

53.A. borrowers B. lenders C. peoples D. others

61. Which of the following is the main purpose?

A. To remind students and their families to repay their loan.

B. To compare interest rates.

C. To inform students and parents of the various loans available.

D. To show that government loans charge the least interest.

A. full-time students B. parents

63. If parents had three children in college how much could they borrow annually?

64. According to the passage which of the following is true.

A. The government lends students enrolled at least half time up to 3，000 annually.

B. Students may borrow up to $4，500 annually from four sources.

C. Students enrolled less than half time may borrow money.

D. The current interest rate from banks is 5 percent.

A. the student‘s school determines who is an eligible lender

B. money is available for student loans

C. students need not be enrolled half time to borrow money

D. the interest rate on student loans is increasing

Are you aware that you actually possess six senses? The sixth is a muscular sense responsible for directing your muscles intelligently to the exact extent necessary for each action you perform. For example， when you reach for an object， the sensory nerves linking the muscles to the brain stop your hand at the correct spot. This automatic perception of the position of your muscles in relation to the object is your muscular sense in action.

Muscles are stringly bundles of fibers varying from one five-thousandth of an inch to about three inches. They have three unique characteristics， they can become shorter and thicker; they can stretch; and they can retract to their original positions. Under a high-powered microscope， muscle tissue is seen as long， slender cells with a grainy texture like wood.

More than half of a person‘s body is composed of muscle fibers， most of which are involuntary—in other words， work without conscious direction. The voluntary muscles， those that we move consciously to perform particular actions， number more than five hundred. Women have only 60 to 70 percent as much muscle as men for their body mass. That is why an average woman can’t lift as much， throw as far， or hit as hard as an average man.

66. According to the selection， the muscular sense is responsible for ______.

A. the efficiency of our muscles B. the normal breathing function

C. directing our muscles intelligently D. the work of only our involuntary muscles

A. one always knows what his muscles are doing

C. one‘s muscles are used only to the extent necessary for each action they perform

A. contract B. stretch C. retract D. do all of the above

70. According to the selection more than half of a person‘s body is composed of ______.

The large part which war played in English affairs in the Middle-Ages， the fact that the control of the army and navy was in the hands of those that spoke French， and the circumstances that much of English fighting was done in France all resulted in the introduction into English of a number of French military terms. The art of war has undergone such changes since the battles of Hastings， Lewes， and Agincourt that many words once common are now only in historical use. Their places have been taken by later borrowings， often like wise from French， many of them being words acquired by the French in the course of their wars in Italy during the sixteenth century. Yet we still use French words of the Middle Ages when we speak of the army and the navy， of peace， enemy， battle， soldier， guard and spy， and we have kept the names of officers such as captain and sergeant. Some of the French terms were introduced into English because they were needed to express a new object or a new idea. In other cases a French and a native English word for the same thing existed side by side. Sometimes one or the other has since been lost from the language; but sometimes both the borrowed and the native word have been still in common use.

A. most of today‘s common English military terms dated from the sixteenth century or later

B. a study of the English vocabulary shows the important part which war has played in the history of England

C. many French words borrowed into English during the Middle Ages have since disappeared from the language

D. many military terms used in English were originally borrowed from French， some as early as the Middle Age

72. All of the following have something to do with the introduction into English of many French military terms except that _______.

A. war played an important part in English affairs in the Middle Ages

B. the English army and navy were controlled by those who spoke French in the war between England and France

C. France invaded England in the Middle Ages and many battles were fought in England

D. much of English fighting was done in France in the war between England and France

A. we no longer use any French words of the Middle Ages

B. many words once common are not used any longer and they are replaced by Italian words

C. French military terms have disappeared from the English language

D. many words once common are now only in historical use and their places have been taken by the newly-borrowed words

74. Which of the following is not the French word borrowed into English during the Middle Ages?

A. French words are needed to express something new

B. a French and a native word for the same thing have been still in common use side by side

C. French word or the other has been lost from the English language

D. “battle” is the borrowed word and “fight” is the native one

“Fingers were made before forks” when a person gives up good manners， puts aside knife and fork， and dives into his food， someone is likely to repeat that saying.

The fork was an ancient agricultural tool， but for centuries no one thought of eating with it. Not until the eleventh century， when a young lady from Constantinople brought her fork to Italy， did the custom reach Europe.

By the fifteenth century the use of the fork was widespread in Italy. The English explanation was that Italians were averse to eating food touched with fingers， “Seeing all men‘s fingers are not alike clean.” English travellers kept their friends in stitches while describing this ridiculous Italian custom.

Anyone who used a fork to eat with was laughed at in England for the next hundred years. Men who used forks were thought to be sissies， and women who used them were called show-offs and overnice. Not until the late 1600‘s did using a fork become a common custom.

A. brought to Europe from America B. begun when forks were invented

C. brought to Europe from Asia D. invented by Italians

A. all over Italy B. only in Constantinople

A. imitate the people of the East B. keep their food clean

A. well mannered B. sissies C. show-offs and overnice D. both B and C

The Bicycle in China

The bicycle is the most popular means of transportation in China. China is a country “on bicycle wheels”。 People ride them for various purposes such as going to and from school and work. Bicycles are very cheap and easy to buy in China.

The future of bicycle will be bright. In some European countries， city governments have arranged pedestrians to use “public bicycles” to travel round the city center free of charge